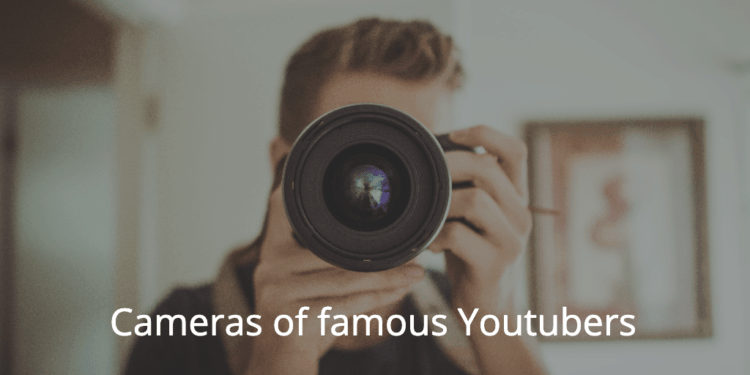 Very often, people that want to start their own youtube channel are curious about which camera their favorite youtubers uses.

This information can be hard to find. That’s why we did the research for you and save you hours of research!

Use the navigation below to find your favorite YouTubers or just scroll through the list to see what cameras and microphones are popular among youtubers right now.

Just remember, you don’t have to start out with the same equipment.

The equipment these YouTubers have now is a result of many years of creating videos and improving their equipment.

A lot of the famous YouTubers started with cheap point-and-shoot cameras or used their phone to record videos. What matters most is the content you produce.

If you make entertaining videos, your viewers will enjoy it even it wasn’t shot on a $2000 camera.

If you are looking for a camera to use for YouTube, our vlogging camera buying guide also helps to find the best camera that fits your budget.

Jump directly to your favorite YouTuber

What Camera Does Ace Family Use?

For editing their videos, they use an Apple MacBook Pro.

What Camera Does Aspyn Ovard Use?

Aspyn Ovard uses some high-end equipment to make her videos but also uses Canon G7X which is a great camera and used by many youtubers worldwide.

What Camera Does Bratayley Use?

Bratayley use an easy-to-use digital point-and-shoot vlogging camera but we are not 100% sure which one. The Canon G7 X Mark II and the Sony RX100 IV are the most popular cameras among YouTubers that don’t use DSLR cameras so it’s most likely one of those two.

What Camera Does Christian Guzman Use?

Christian Guzman currently switches between a Canon 5D Mark IV and a Sony a7S. Both of these are used in combination with a Rode shotgun microphone.

What Camera Does Marzia Use?

Maria (aka Cutiepiemarzia) has tried using a DSLR but found that too uncomfortable to carry around while vlogging on the go. She has since picked up a point and shoot camera a lot of other vloggers use, the Canon PowerShot G7X II.

What Camera Does David Dobrik Use?

What Camera Does Emma Chamberlain Use?

Emma Chamberlain keeps it simple and uses a Canon Powershot G7 X Mark II in combination with her iPhone XS.

What Camera Does FaZe Rug Use?

Faze Rug uses the Sony a6500 and Canon 80D. For making vlogs when portability is more important he uses the Canon G7X Mark II.

What Camera Does Markiplier Use?

Markiplier uses the Sony a7R Mark II which is an expensive but incredibly capable camera. He uses the Logitech C920S webcam in combination with the Rode NT1 microphone for gaming videos.

What Camera Does Marques Brownlee (MKBHD) Use?

Marques Brownlee is on a level of its own in the YouTube community. Marques has invested a lot of money into extremely high quality video equipment and it certainly shows in his videos.

What Camera Does NELK Use?

The NELK boys use a Sony a7R Mark III camera with a Rode VideoMic Pro+. The lens they use is a Sony 18-135mm zoom lens so they can film the pranks at a safe distance.

What Camera Does NigaHiga Use?

His setup was clearly visible in one of his behind-the-scenes videos. We recognized most of the equipment but are not 100% which tripod he uses. The camera he uses is a Panasonic GH5 which is very popular among YouTubers. He uses this camera with a Rode VideoMicro microphone and a Neewer 14-inch ring light for better lighting.

What Camera and Recording Software Does PewDiePie Use?

When PewDiePie is vlogging he uses a simple point-and-shoot camera: Canon PowerShot G7 X. His gaming setup however is a lot more elaborate.

For recording his face he uses a Sony a7R II on a tripod connected to a field monitor. For extra lighting he uses a Neewer camera ring light with a softbox diffuser to soften the light.

For recording his voice he uses an AKG Pro Audio C414 mounted on a Rode PSA1 swivel mount and connected to a Roland RUBIX22 USB Interface.

To actually play the games he uses the BenQ ZOWIE Gaming Mouse with the Corsair STRAFE mechanical keyboard. The monitor he uses is the ASUS ROF Swift PG27VQ Curved Gaming Monitor. The monitor is set up on his Humanscale float standing desk which can be easily transformed from a normal desk to a standing desk. For game audio he uses a Razer Kraken Pro V2 headset.

He records his gameplay with OBS Studio. To view his full setup more in-depth and see his PC specs and more, check out our article on PewDiePie’s setup.

What Camera Does Ricegum Use?

Ricegum currently uses the Sony a7S II as his main camera. The microphone he uses is the Rode Videomic and he mounts his camera on a JOBY GorillaPod. Before he upgraded to the Sony a7S II he was using the Canon PowerShot G7X II.

What Camera Does RomanAtWood Use?

Roman Atwood uses the Canon 1DX or 5D Mark IV whenever possible. For vlogging he uses two point and shoot cameras: the Sony CyberShot RX100 IV and the Canon PowerShot G7 X Mark II. Both cameras are very easy to carry around and record high quality video footage which makes them very popular among vloggers on YouTube.

What Camera Does Shane Dawson Use?

Shane Dawson uses different cameras depending of the type of video he is recording. For recording sketches he uses a Panasonic DMC-GH1K. For recording short movies he uses a Canon EOS 5D Mark IV which is a high-end full frame DSLR camera. For recording vlogs Shane keeps it very simple and just uses his iPhone. Especially the newer models produce very high quality video, more than good enough for YouTube.

What Camera Does Shaycarl/Shaytards Use?

Just as many other vloggers on YouTube Shaycarl uses the Canon G7 X Mark II. Lightweight, compact, durable, excellent image quality and a flips screen so you can see yourself while vlogging to make sure you are in frame.

Missing any YouTubers or have any of the featured YouTubers upgraded their equipment? Please let us know!

By helping to keep this list up to date we will be able to provide the most accurate answers for our readers.